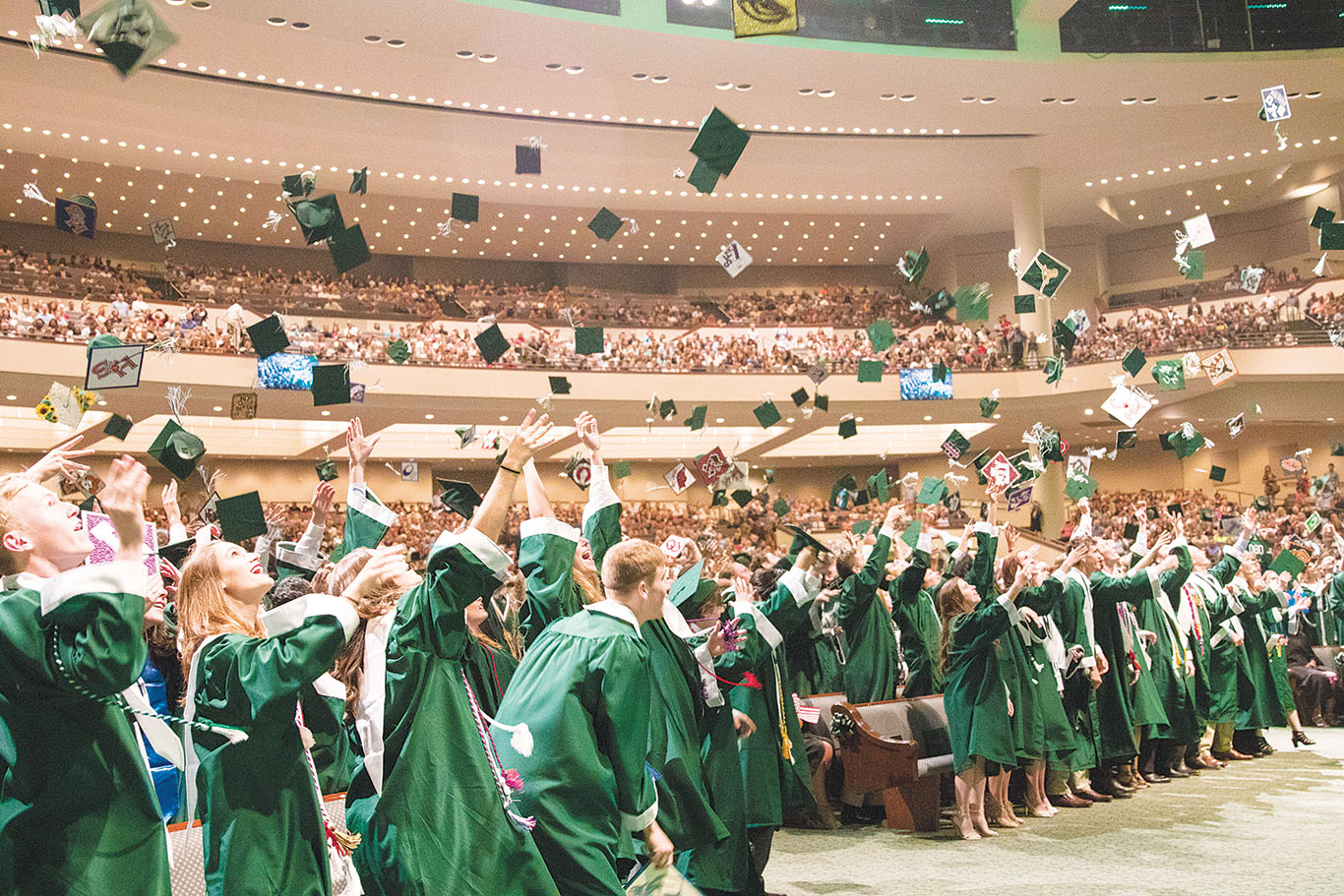 It was a day of high emotion for Prosper High School graduates from the time their procession began to the time they left the auditorium. There were tears and laughter as the Class of 2017 performed the Prosper Rumble one final time as a class during the graduation ceremony Saturday at Prestonwood Baptist Church in Plano.

As the graduates marched in to begin the ceremony, the band played while parents and friends shouted to their loved ones and held up signs of encouragement as they entered the auditorium letting their graduates know their family was with them.

The pasteboards of their graduation caps were decorated with logos of the colleges the seniors plan to attend or with the military branch logo they plan to join.

Class President Cutter Nielsen put things into perspective early when he said “This is a pretty awesome privilege to get to speak to all of you today. Walking across the stage does not mean we forget our friends.” And in a lighter moment he added “Mom and Dad, it does not mean I have to pay for my gas.”

Next it was the Salutatorian’s turn. Svaksha lyengar told her classmates to remember this new chapter of their lives that is unfolding before them. “Don’t underestimate the positive impact you can have on people’s lives,” she said. “Don’t underestimate what a bright light you can be. In the end, it’s not really about the success and the fame and the wealth, it’s going to be about the memories you made and the people you shared them with. So, go on and make me proud, Class of 2017. I can’t wait to see what y’all do.”

Prosper High School Principal Greg Wright shared some impressive statistics about the Class of 2017. Fifty-one students qualified for the top 10 percent of the class. There were 11 commended Merit Scholars and three National Merit Scholars. He also recognized Meghan Davis as the first ever PHS student on the way to MIT. Then he asked graduates planning to enter a branch of the military to stand. Close to 15 responded and the auditorium erupted into great cheers and applause. In fact, they repeated that every time one of these future military members walked the state to accept a diploma.

Wright expressed pride in the Senior Class that was able to raise $10,623 in one month for Relay for Life in the fight against cancer. “These are champions in their academics, in their performance, in the giving and in their behavior,” Wright said. “This is the nicest group of students I have ever been around in my career.”

He spoke directly to the Class of 2017 and said, “You are amazing. This world is a better place because of you. I couldn’t have picked a better Senior Class to go out with,” he added referring to his coming retirement. “Do not every give up on your dreams,” he said.

Valedictorian Alexis Vu took her turn at the podium and commended parents for sitting through a graduation ceremony for 517 “when you only care about one.” She complimented her classmates on becoming one of the most successful classes in the history of Prosper High School. She cited more than $11.5 million raised in scholarships and the more than $40,000 raised to fight cancer.

She said even more important is what she’s seen from classmates through four years of high school. “I’ve spent my four years at this school watching incredible acts of everyday kindness, endless hours of hard work put into events and performances beyond what your talent required, loving friendships, the not-so-loving friendships that made you learn how to have loving friendships and an unrivaled sense of community.”

Then Vu warned the Class of 2017 that they should “Acknowledge the things you’ve learned at this hallowed institution and look back occasionally but… don’t stare. And, more importantly, don’t become a statistic…. And by that, I mean don’t be that kid who peaked in high school, because we all will make fun of you at the reunion.” She added that this class “has the biggest potential to change the world than any other.”

There was also fun to be had at the graduation of the Class of 2017. The class did the Prosper Rumble one last time as a class. Then, following the class song, 517 graduation caps took flight expressing a glee that only graduates realize. And another Prosper High School class leaves the cocoon of high school life to begin anew with a clean slate.