Wednesday, August 16 was like any morning as Steve and Angie Harrington readied their three children, Blake, a senior, Hayley, an eighth grader, and Keely a fourth grader, out the door for the third day of school. Little did they know that in just twelve short hours, their lives would be changed forever.

That evening, Steve was attending a meeting at the school and Angie had just gotten home from work to their three children. At approximately 6:30 p.m. the fire alarms went off unexpectedly. Within seconds, Blake was on the phone with Prosper 911 reporting a fire in the home.

“It was unreal. It happened so fast,” said Angie describing how the fire escalated and overtook their home in Twelve Oaks. “We literally left with no shoes on or anything.”

Blake, who plays varsity football for the Prosper Eagles, didn’t hesitate to make sure his mother and sisters were out of the home safely.

When Steve arrived at the home, fazed, he found himself face to face with the Prosper Fire Department as he attempted to enter the property.

Prosper football coaches Brandon Schmidt, Tony Cooper and Ricky Lopez were among friends and community who gathered at the home to support the Harrington’s.

Schmidt pulled Steve aside and said Blake should take the next morning off of practice, but Blake wouldn’t have it.

“He was there that next morning leading this team like he always does,” said Schmidt. “He didn’t miss a beat, it was incredible,”

Little did Schmidt know that before Blake made it to that 5:30 a.m. practice, he and Angie were rummaging through the ashes trying to find his contacts so he could be one-hundred percent. After some searching, they found them and he made it to practice. On time, even.

“Blake handled it better than any of us, honestly,” said Angie. “But I could tell the gravity of the situation was starting to sink in with him after a couple days.”

Blake had decided to take advanced placement classes so he could possibly get accepted into Stanford University. The courses require students to submit assignments online and with no computer or internet access due to the fire and displacement, he was considering dropping and just taking standard classes. On Friday, Angie got a call in the middle of the day from Blake.

But at the other end of the line she noticed a more positive voice. Blake was calling to tell her he had just been offered a preferred walk-on at Stanford University.

“God’s timing is perfect. I never heard another word about dropping the classes,” said Angie.

“Playing college football has been a dream of mine since I can remember, so this was an absolutely amazing feeling,” said Blake.

As for the Harrington’s, the reality is setting in. They were able to salvage some items such as baby books, some old photographs and even a first home-run ball, but the home was considered a total loss.

Angie continued, “The fire has been a life lesson for all of us. We might miss the material things, but we do not need them.”

The Harrington’s say the outpouring from the community was more than they could ever imagine. Within hours, people had come together with boxes and bags from Dick’s Sporting Goods and other places with clothing and shoes for the entire family. They were able to stay at Buddy Wilson’s barn until they found a rental home.

“Once again, we were blessed with an opportunity when we found this home,” said Angie. “We knew we were going to be out of our home about a year so it was important for us to have something we could call home until that time.” 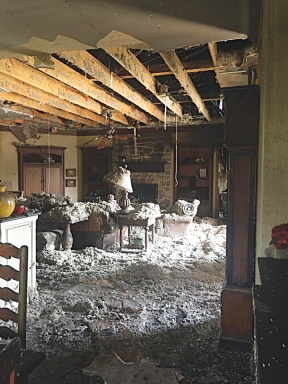