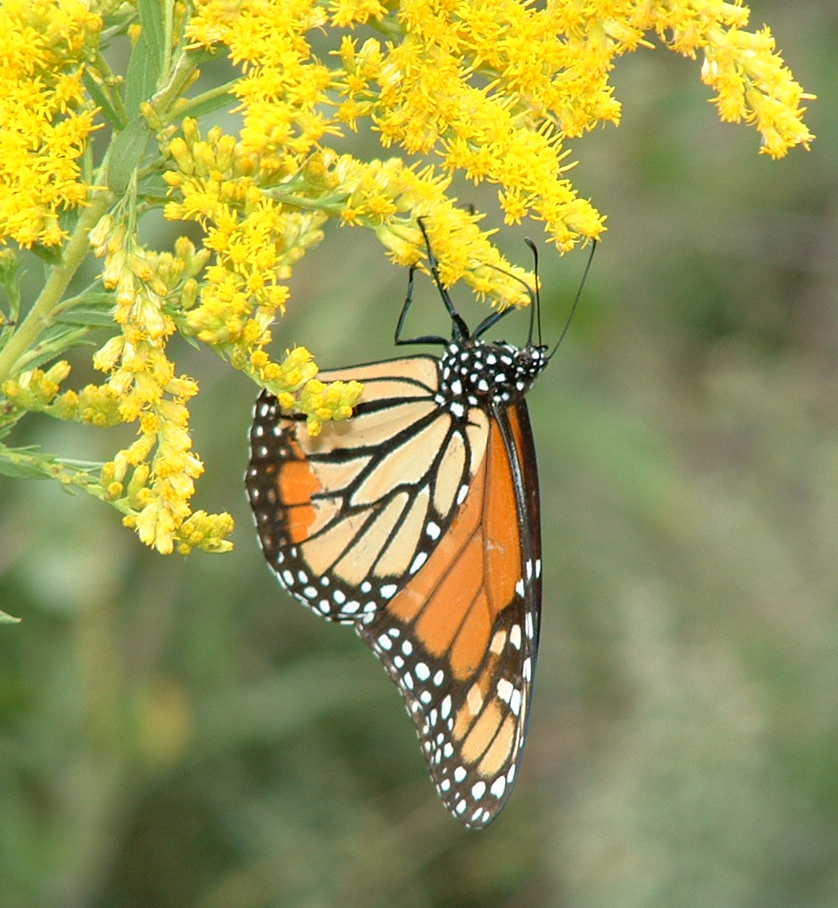 JOYCE GODWIN/HERALD DEMOCRAT A Monarch butterfly on the migration trail to overwintering sites in Mexico, stopped along U.S. Highway 82. They can't fly in cold weather so they have to get to warmer climates soon.

It is time for Monarch butterfly watchers to look up. In a strange world of flight, carried only by the current of the wind, the baffling migration of the Monarch butterfly is breezing through North Texas. The Monarchs have begun their southern flight. One of the unsolved mysteries of nature is the Monarch butterfly. How do they know when to head south? How do they know where to go since the butterflies heading south are not the same ones who left there? They are, instead, the great-grandchildren of the butterflies that left the previous spring.

Perhaps you’ve noticed in the past few days that Monarch butterflies are becoming more visible. It’s not just a coincidence. When you see them these days, they will always be moving in a southwestern direction. Their movement will be the characteristic drift of the butterfly, and they are gracefully floating on the migration toward central Mexico; their only map is the one imprinted on their genes. The ones we see now hatched from eggs laid last spring and their parents are long gone.

Most adult butterflies live only about a month, but the final generation, the ones we are seeing today — they will live about seven to eight months — the time required to make the “incredible feat” of flying from Canada and the U.S. to central Mexico. The multi-generational migration of the delicate Monarch is rare.

Somehow, at this time every year, the Monarchs know to head southwest until they arrive at the overwintering place in central Mexico. Researchers are still not sure how the butterfly knows where to go, but think it uses a combination of the magnetic pull of the earth and the position of the sun among other things. For me, the mystery is yet another testament to the existence of a mighty and all-knowing creator.

Monarchs roost for the winter from October to late March in the Oyamel Fir forests at an elevation of nearly two miles above sea level. Caretakers of the overwintering area measure the space they cover in hectares and this is one way the Monarch population is measured from year to year. There is much concern because that measurement has been decreasing over recent years.

In 1991, more than 75 percent of the wintering Monarchs from North America froze to death in Mexico as a result of three days of rain and sub-freezing conditions. Before that, estimates of up to one billion monarchs made the epic flight each fall from the northern plains of the U.S. and Canada to sites north of Mexico City, and more than one million monarchs overwintered in forested groves on the California Coast. Now, researchers say that only about 33 million monarchs remain, and that represents a drop of more than 90 percent across North America. Threats to the Monarch include the loss of milkweed — the key plant that monarch caterpillars need to survive — from agricultural and natural areas, degradation of overwintering sites, and climate change.

This year, social media sites and websites dedicated to watching the Monarchs are touting an increase in sightings of the speckled insect as they journey south across our continent. The website wideopencountry.com states a massive migration of monarchs is coming to Texas. The Texas Parks and Wildlife website at www.tpwd.texas.gov calls the state of Texas an important state in the Monarch migration “because it is situated between the principal breeding grounds in the north and the overwintering areas in Mexico. Monarchs funnel through Texas both in the fall and the spring. During the fall, monarchs use two principal flyways. One traverses Texas in a 300-mile-wide path stretching from Wichita Falls to Eagle Pass. Monarchs enter the Texas portion of this flyway during the last days of September. By the third week of October, most have passed through into Mexico. The second flyway is situated along the Texas coast and lasts roughly from the third week of October to the middle of November.”

There are several groups dedicated to promoting awareness of the flight of the Monarch, and information may be found online at their websites. One of the best is http://www.monarchwatch.org. One of the solutions recommended to help the Monarch population is for landowners to plant milkweed. Another website, http://www.livemonarch.com calls for people across the U.S. to help the Monarch. “The Monarchs need your help NOW. Please plant seeds and ensure their survival. A Milkweed in every yard! You have the power to instantly change the world!

I’m going to plant Milkweed this year because I haven’t seen any Monarchs visit my yard yet, and usually, by now I see them drifting overhead or stopping on my pecan tree. There is still time for sightings. Let us know if we have sightings in Prosper. Send a picture if you can.