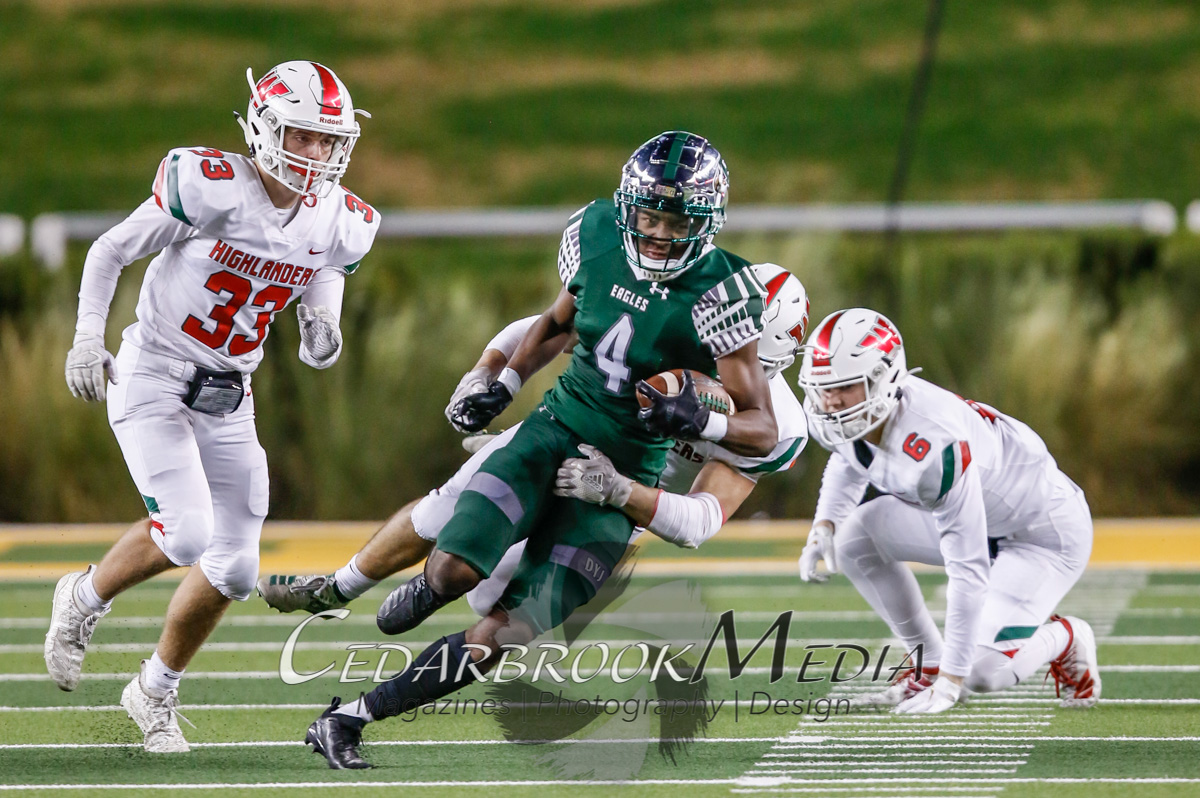 The Eagles (11-2) walked out of McLane Stadium with a gold football trophy and clinched the Regional Semifinal title. They are heading to round four of 6A (Div. I) playoffs for the first time since 2009. Quarterback Jackson Berry led the Eagles to victory over The Woodlands (8-5) 38-14.

Despite the two-hour drive and a week reserved for Thanksgiving break, players’ and coaches’ families, fans and students traveled to Baylor University for the matchup. And their time was honored as they witnessed a win showcasing the Eagles’ effort and preparation throughout the week.

Prosper’s offensive line paved the wave for a total of 565 yards and they were unmatched as the Highlander’s ended their night with only 162. Prosper controlled both sides of the ball from kickoff to their last snap.

From the start the Eagles established this would clearly be a passing game. And, the quarterback, receivers and strong o-line did not disappoint.

The offense was on fire against the Highlanders as they pounded the end zone every quarter adding points to the scoreboard. Berry threw 312 yards and completed 22 out of 33 passes. He carried the ball in for Prosper’s first and last touchdowns. He wasn’t short on the passing game either as he threw to Hayden Metcalf for a 13-yard touchdown. Metcalf showed to be a strong receiver as he ended the game with 123 yards of his own. Fans saw junior Cameron Harpole run 46 yards to drive the ball into the end zone.

The offensive line, led by Jake Majors and sophomore Nash Gagliano created holes for J.T. Lane to rush 115 yards. And with the line’s aid, Tyler Bailey terminated the tie in the second quarter as he flipped over the Highlander’s defense to put the Eagles back in the lead.

The defense also showed their strong presence on the field as they put up a wall throughout the whole game, and only let in two touchdowns. Herman Lee, Tate Nichols and Aidan Siano all had dominating tackles to put stops to the Highlander’s offensive drives.

In a moment of fear for the Eagles, the Woodlands were placed on Prosper’s own 6-yard line, Siano managed to intercept the ball to keep them in the lead. He wasn’t the only one that forced a turnover. The crowd witnessed other interceptions from Josh Graham and Jordan Miles. Additionally, Devin Leith-Mathis caught a pass, intended for Woodlands’ receiver Jack Calhoun, to mark his first interception of the season.

To round up all facets of the game, kicker Brad Larson was a reliable source of points as he made all points after touchdowns and put up a field goal to bring up Prosper’s lead.

The Eagles will face off against Rockwall (11-2) as they battle for the State Quarterfinal title on Saturday, Dec. 7 at 6 p.m. The game will be played at The Star in Frisco, and marks the first time Prosper has competed in the fourth round of playoffs since 2009. Walking out of McLane Stadium, the players and coaches reignited hope for a long playoff run as the Eagles head into the holiday season still playing football.