Mr. Alstrin makes his home here in Prosper with his wife Christina and their 3 children: Collin(10), Addison(7) and Harper(3). He moved here after serving at L.D. Bell High School in Hurst, Texas for 5 years, The University of Houston for 3 years and Lake Highlands for 6 years. As the Director of Bands at PHS, he conducts the Wind Ensemble, Jazz Ensemble and team-teaches the Mighty Eagle Marching Band, Woodwind, Brass, Percussion and Color Guard Classes. Mr. Alstrin also travels to assist and teach-team beginner and band classes at Rogers and Reynolds Middle School.

He thoroughly enjoys doing his life’s work in a town he loves, with a community that has established its heartbeat through a supportive school district, because of dedicated parents. He always had a passion for music and was inspired by his grandparents…a grandmother who trained at the American Conservatory and a grandfather who was a child psychologist. Alstrin was an impressive mathematician in school, and it wasn’t until his later years that he chose the field of music as his life’s practice. He realized that he would be most effective as a teacher and band director.

His excitement about traditional fine arts, regardless of what medium, creates an electricity in the air that pulls you in. Whether the topic is band, choir, orchestra, painting or theater, he is an advocate for the payoffs and rewards of self-expression.

He speaks of the very powerful and multi-faceted synergy that goes into a band production. Although each member is an individual, the 350 musicians come together for what is known as one body working in perfect time to create a production. That production evolves week after week, by process of tweaking, perfecting and rebuilding. The team aspect is like a football play that goes well, or a strategy that is perfectly timed. 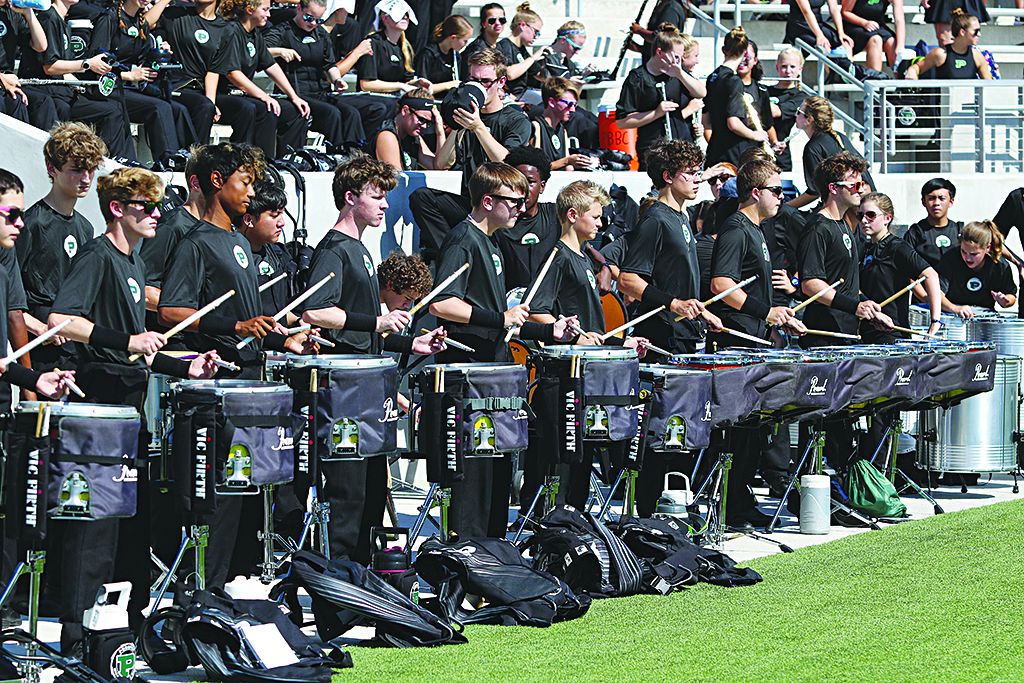 Band is a combination of the mathematics of music reading, mastering your instrument while displaying physical ability, self-control and coordination. It is an institution that historically works, one that is proven so, as it is military based. Figuratively, band is an instrument and a tool that the state of Texas has implemented and perfected that offers a creative and artistic outlet that combines much needed structure and life lessons that create well rounded individuals that value the importance of comradery and group effort.

Literally, Band creates bonds. It gives like-minded students a place to belong, a place where they fit in and are welcome. Mr. Alstrin speaks of the closeness that is established with those bonds between students. He also says, “Saying goodbye to Seniors at graduation is difficult because they’ve invested in you and you have invested in them, most of the time for up to 7 years. The pleasure is that we get to watch them grow up.”

Mr. Alstrin believes that co-curricular activities become the glue that holds a school and community together. He shares the philosophy of UCLA Basketball Coach John Wooden, never speaking to his team about winning or losing, he speaks on the importance of players doing their very best. In life, Band, or anything that we find important, the measurement is against ourselves. One of his proudest moments was last year when he was recognized by Prosper Alumi and academic Super Stars; Emily Ray, Sydney Nutter and Taylor Hasz as their most influential teacher.