Electricity in the Air

Brandon graduated from La Marque High School in 1995, where as a coach’s kid, he made a name for himself on the football field a couple of times with Class 4A state final appearances. He then went on to be a three-year letterman on the football team at Sam Houston State University, graduating in 2001 with a bachelor’s degree in Kinesiology and History. He also obtained his master’s in educational administration from Lamar University.

Before landing in Prosper, Coach Schmidt spent nine years at Cedar Park High School, two at Stony Point High School in Round Rock, and three at LaPorte High School. He and his wife Katie make their home here in Prosper with their 3 children: Sophie(10), Sabrina(8) and Carter(2.5).

He grew up a coach’s kid and spent most of his time in the Houston and Austin areas. He says there is nothing else in the world he could ever see himself doing as he comes from a proud family of coaches…it’s in his blood. He smiles when he remembers Friday nights growing up. The entire lifestyle of being raised with a father who was a coach is a unique experience. He recalls late nights on buses and standing with coaches and friends on the sidelines of football games. And of course, the comradery which is probably where he realized the truth in one of his favorite sayings, “When you attach yourself to great people, great things happen.”

An influential person and role model in Coach Schmidt’s life is his friend and mentor, Chris Ross. Regarding coaching, Ross set a great example in terms of working saying that, “The work has to get done, no matter who does it.” And Coach Schmidt remembers all too well the late Sunday nights watching tape for hours upon end until the job was done. Coach Ross taught him that “The work of a coach isn’t about us, it’s about the kids and making the experiences the best they can for them.”

Coach Schmidt talks about the influences in his life but is also proud to have the opportunity to make a difference in the athletes’ lives he coaches. He recalls one student whose freshman year was less than stellar academically, as he failed every class. When asked why he failed, the kid said, “Because I hate school.” Coach Schmidt then asked him if he liked money, to which the student said, “YES!” “Then I suggest you start to like school,” he said with a laugh. That same student who said he hated school is now in the process of obtaining his master’s degree, which is a far cry from where he once was. It serves as proof that when kids have a little guidance the sky is the limit if they believe they can do it. Sometimes coaches are the only one to tell a kid they can. 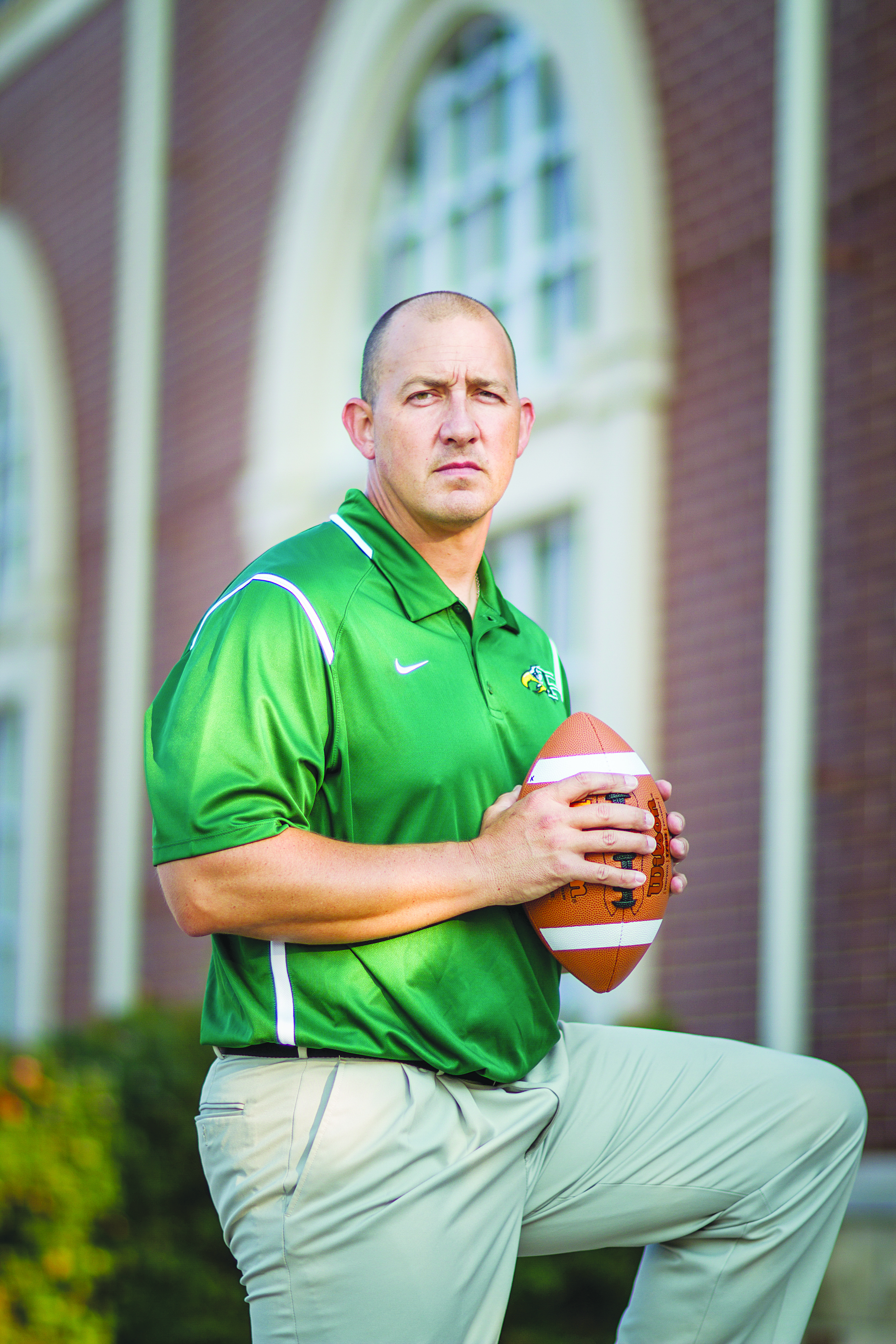 Schmidt says that he can’t just choose the one best thing about Prosper but started with the parents, faculty and students alike here, having a great work ethic. The community support is second to none as the entire town rallies around its kids no matter what activity they’re in. He is happy and proud to be a part of an administration that supports athletics the way they do. He credits the faculty for the stellar reputation Prosper ISD has, both academically and athletically. With the main goal of raising well rounded students in Prosper, it’s known as being a very kid friendly school. “Prosper parents love their kids and we do too” says Coach Schmidt. “Which is exactly the way it’s supposed to be.”

You can expect an exciting launch into the 6-A District from Prosper Eagles this season. The team has a strong Senior class with players like LSU Commit Cade York and Keegan Shoemaker on the front lines. You’ll want to watch for offensive linemen Carson Shaffer, Cullen Perkins and Adam Sherriff, as well as running back Wayne Anderson. Jostein Clarke will take on the role of Wide Receiver with Devin Haskins, while Jack Peterson and Larry Green get busy on the defensive line.

No matter what the name on the back of the jersey is, Coach Schmidt knows that it takes an entire team to win. It takes a team of great coaches, supportive families and administrators, booster clubs and PTA’s…along with the hard work and dedication of a team of good, well-rounded young men. You just can’t have a successful athletic program without the support of a community like Prosper. And judging by what we have here, there will be a lot more trophies in the case at Prosper High School come May.