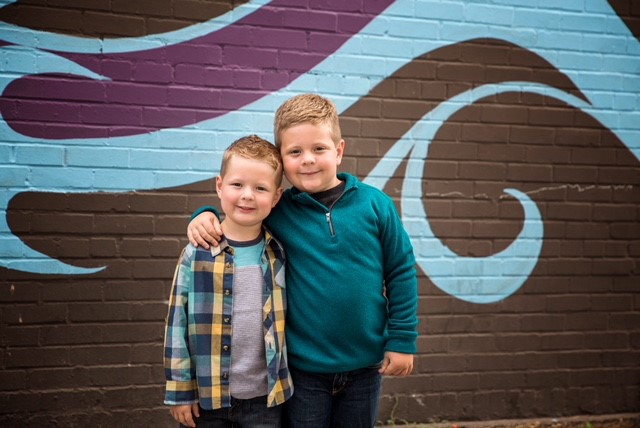 Garret is 7 years old and in 2nd grade and Riley is 6 years old and in 1st grade. They want to go on a cruise with their dad this summer and they think that would be very cool. They also like huge sets of Lego and being outside.

What is your favorite color?

Riley: No, it’s like yellow and brown mixed together. And I like glitter added to it too. I tried to make glitter glue and added white too, and it turned out kind of neat.

Riley: My favorite subject is science. One day I did this really cool science experiment where we talked about real worms and gummy worms. The real worms crawled on my hand. They kept them in a bucket in the refrigerator. They moved kind of slow because they were cold I think.

So, you lost a tooth today Riley?

Riley: Yes, at lunch. The nurse gave me a treasure chest to put it in.

What are you going to do with it?

Riley: I’m not going to give it to the tooth fairy tonight. I’m going to hold on to it for a little bit. I want to keep it to look at it.

Garrett: I’ve lost 6 teeth! I lost some two years ago and last year, but not this year so far.

Where is the best place you’ve ever been?

Riley: Mine is Universal Studio

Garrett: I would say… (Riley whispers something about not forgetting a place they’ve been)

What do you think you’ll be when you grow up?

Garrett: I want to be an electrical engineer. I want to invent and make things with electricity.

Riley: Military. I want to be an Air Force pilot. But I won’t get to choose. I might be Army or Air Force. Then they will tell me what I’ll get to do.

What do you do for fun?

Garrett: I like to take things apart and see what they can do.

Riley: Engineers like to take stuff apart, take out the messed up thing, and then put it back together with the right pieces and take away the wrong piece.

Garrett: My favorite sport is hockey. I play and watch.

Riley: I quit hockey, but I still like it, it’s just not my favorite subject, but it is my favorite to watch.

Who is the funniest person in your family?

Garrett: Usually me or my dad

Garrett: Yes, you are

Riley: I still think I’m the funniest person in our family