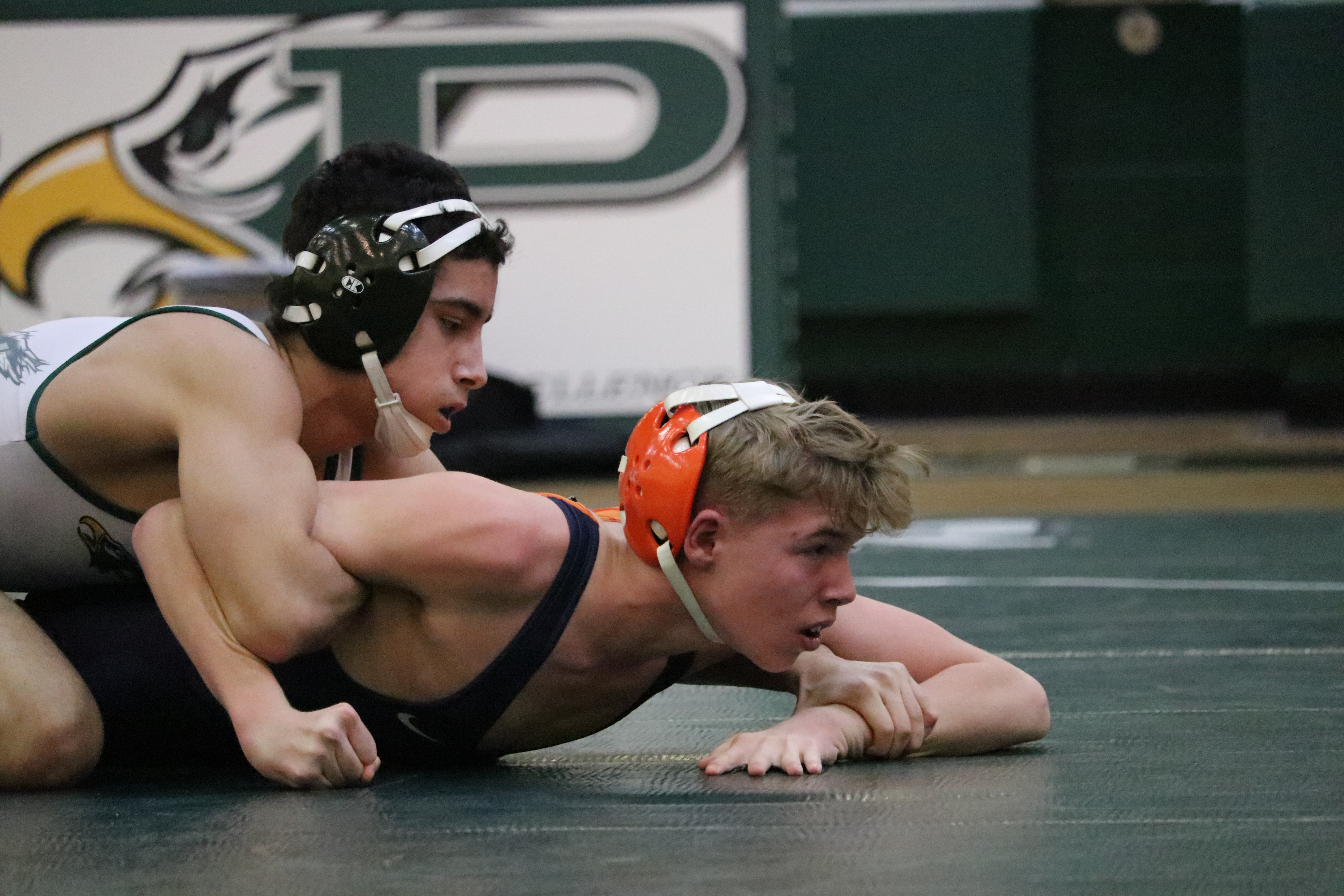 January is a busy month for the wrestling world, and to kick it off, the Prosper Wrestling team held Senior Night to honor nine students in the class of 2018. The seniors include Alyssa Alvarez, Tristan Baugher, Anthony Centrella, Tommy Flaherty, Kade Mann, Jack Megow, Alex Varela, Cristiana Williams, and James Wujek. The night began with a dual against Wakeland in the PHS Arena, where each senior came to the floor with their parents to be recognized. Alyssa Alvarez and Cristiana Williams lead the ladies team, which has held a high standing over the past few years.

Alvarez has added 5 years to her wrestling career which began in 8th grade. Her career highlights began freshman year as a state alternate, sophomore year placing 4th at state, and junior year placing third at state wrestling tournament. She is the first female Prosper wrestler to be a 2-time Regional Champion and a 2-time District Champion. After graduation, she plans to attend Schreiner University on a wrestling scholarship. “I want people to know that girls can wrestle and dominate on the mat,” Alvarez said.

Williams has been wrestling throughout high school and has recorded a pin time as fast as 47 seconds. She has competed in the state wrestling tournament and plans to join the Peace Corps following graduation. “You’re not wrestling other people, you’re wrestling yourself,” Williams said.

Tristan Baugher has been wrestling for 7 years along with competing in track and debate. His career highlights include being a 5-time All-American wrestler, in 7th grade earning the state championship medal, Liberty Nationals Champ, Brute Nationals finalist, Prosper’s first All-American, 3rd at Greco, Freestyle State Finalist, and qualified for Texas’ Dual and Fargo Nationals Team. After graduation, he plans to earn a business degree as well as continue his wrestling career. “I want to be remembered as being nice to everyone,” Baugher said.

Anthony Centrella has wrestled for a year and a half and plans to serve in the United States Air Force following graduation. Centrella says, “Prosper Wrestling has a lot of talent and bonds.” His favorite memories involve getting to Milly Rock with James during a wrestle-off and “When my brother, Christian, and Caleb Redman wrestled Tristan Baugher at our first wrestle-off of the season.” Centrella says he would like his team to remember him for his style and fashion sense outside of the wrestling room.

Tommy Flaherty has wrestled for 5 years. Flaherty will be graduating in the top 10% of his class and has been inducted into the National Spanish Honors Society. He placed 5th in the State wrestling tournament his junior year, as well as being named a team captain both junior and senior year. He plans to enlist in the United States Air Force post-graduation. “I would hope people remember me as someone who helped younger teammates to believe in themselves,” Flaherty said.

Kade Mann has been wrestling for 5 years, 4 years of which have been on the varsity team. Mann received the Eagle Heart Award for Technology and was chosen for Talon Tech. “I would like to say thank you to my team. Y’all have been amazing friends and have made high school memorable. I love this team and I am so thankful for everyone on this team,” Mann said. Following graduation he plans to major in computer science and has been accepted to UNT and Texas Tech. He says he would hope to be remembered for being a kind and nice guy.

Jack Megow has been wrestling for 5 years and has career highlights which include hitting the 138-weight class for a month, a record of 6-1 his sophomore year before being injured, and undefeated on JV his senior year. He has earned a green belt in taekwondo, and as a team in soccer won multiple trophies. Post-graduation Megow plans to attend the Universal Technical Institute in Irving, TX, then transfer to the high performance UTI in Mooresville, North Carolina. He says he hopes to be remembered for his sense of humor and how he tries to pick others up after a rough time.

Alex Varela has been wrestling for 5 years and has career highlights of placing 5th in the district tournament his junior year. He received academic all-district 2016-2017 in football and earned the underclassman award for Law Enforcement II in 2016. Following graduation, Varela plans to pursue a career in law enforcement. “I want people to remember me being happy and positive all the time,” Varela said.

James Wujek has been wrestling for 7 years and his favorite memory is going to state with his sister, Chloe, and wrestling on the same team as both of his sisters. Over his wrestling career, Wujek has been on varsity all four years of high school, is a 2-time state qualifier, earned 4th place at state, achieved over 100 varsity wins, over 60 varsity pins, and over 60 varsity reversals. He has received student of the month in world geography, art and AP computer science. After graduation he plans to go to college and become a zoologist. “I just want to be remembered as one of the boys,” Wujek said.

For the first time in school history the varsity men’s wrestling team brought home the Texas 5A State Duals Championship this year after competing in El Paso. According to the Texas Wrestling live stream, “The Prosper Wrestling Team has been getting it done this season winning and/or placing in every tournament they’ve been to this season. Now they got a 5A Dual State Title. The #1 ranked team in the coaches’ polls backs up its rankings. Prosper beats Carrollton Creekview in the finals 61-13, Creekview has been on the rise of late as well. Ranked #5 in the Coaches Poll for Duals.”

This team is led by new head coach, Sion King, along with assistant coaches Anthony King and Tony Cooper. The class of 2018 would like to also recognize previous head coach Darren Snyder and previous assistant coach Gabriel Reyes for their commitment to building and maintaining the excellence in the wrestling program over the years. The teams follow Dan Gable’s quote, “Once you’ve wrestled, everything else in life is easy,” as a reminder of giving every moment of every match their all. Both the boys and girls wrestling teams have made history in Prosper High School and hope to continue their streak of excellence for years to come.