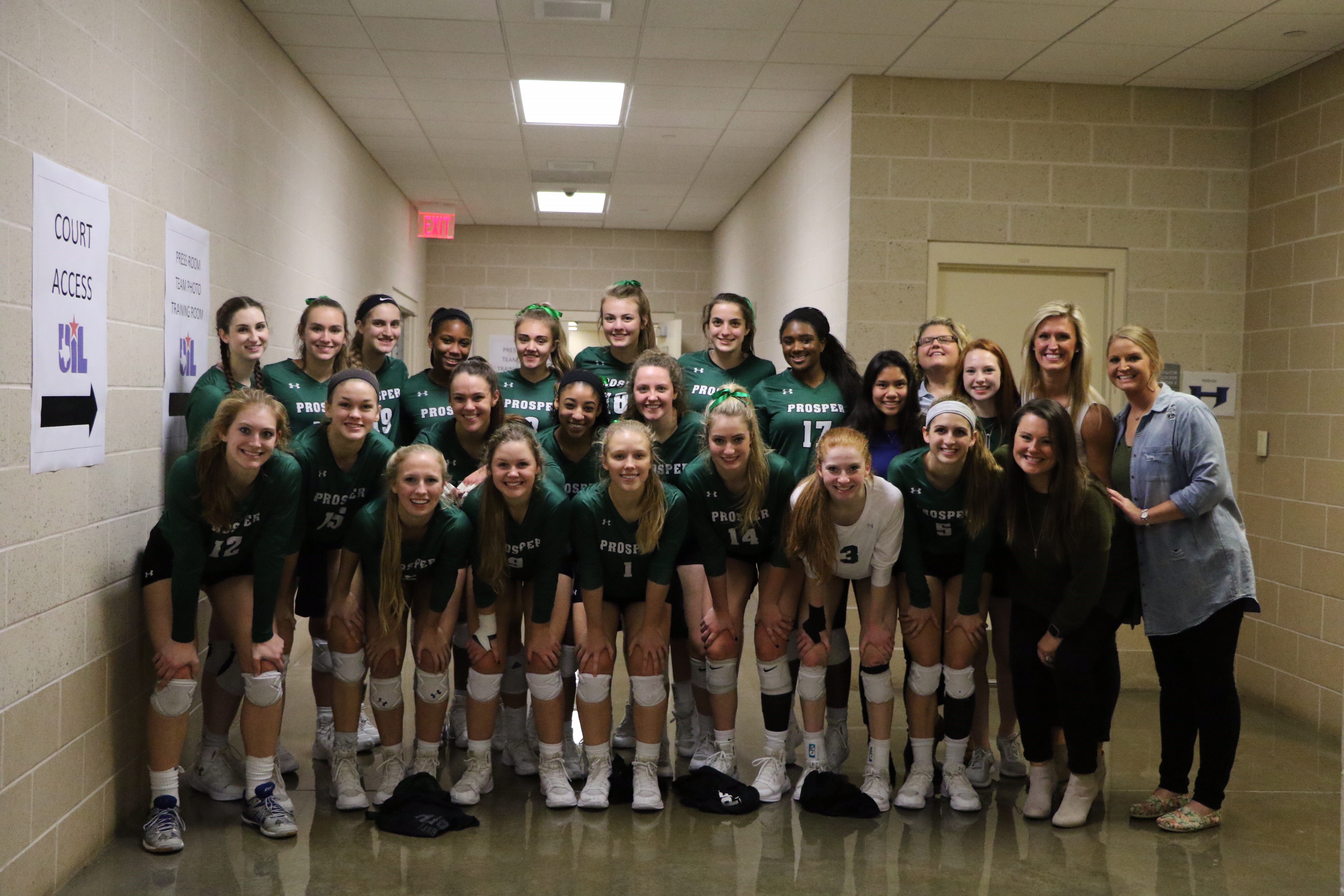 Yes, it’s true…Prosper pride and school spirit are alive and well. After an incredible pep rally Thursday afternoon and an emotional State Send-off ceremony Friday morning, Prosper fans filled the Curtis Culwell Center in Garland to cheer their Lady Eagles on to victory. It’s only the 2nd time in history that Prosper Volleyball has advanced to the State Finals. Head coach Erin Kauffman lead her team to a second-place finish in 2013. This year, after just coming off an exciting sweep of long-time rival Lovejoy to win Regionals, our Lady Eagles are pumped and ready to go. And behind them all the way is the amazing PHS student section, PISD administration and Prosper fan base. Over 1,500 fans showed up to watch yesterday’s game, and the majority of them were there to support our Eagles.

The first matchup in the tournament for Prosper was against the Corpus Christi Tuloso-Midway Cherokees. Tuloso-Midway swept their way through playoffs to win the Region 4 championship. This was their 2nd time to advance as well, losing just last year in the Semi-Finals to Amarillo, who eventually won the state title.

Prosper came out slow, falling behind 2-5 in the first set, but they soon battled back to tie it up 8-8 with a Hope Gramly kill. The Eagles battled back and forth with the Cherokees, falling behind 12-15. Kills by Haley Killinger and Madi Whitmire tied it back up at 16, but the Cherokees answered again with two straight kills of their own. Nevertheless, Prosper was relentless and with Kayla Martin’s defense, they tied it back up at 18, eventually taking the lead and winning the set 25-22.

The start of the 2nd set was a rough one for the Eagles, as errors plagued them both in their offense and their serves. They fell behind 3-11 early. However, the Cherokees suffered their own attacking errors, leaving the window open for Prosper to swing back in. Killinger and CiCi Hecht both came alive, and brought the Eagles back to within 3. Three straight kills from Gramly put Prosper back on top, but again, with their hitting and serving errors, quickly fell behind. Taryn Weber tied it back up at 23 with a block, followed by a Killinger service ace and a kill from Hecht to take the set 25-22.

Prosper came out strong in the 3rd set, leading the entire time. Four straight kills from Taryn Weber allowed the Eagles to break ahead 15-6, and they never looked back. Key blocks from Gramly, Hecht and Weber kept Tuloso-Midway’s hitters at bay, leaving Whitmire to find Killinger for the kill again and again. Prosper took the 3rd set with a final score of 25-13.

Prosper will face the Leander Rouse Raiders in the State Championship today at 4:00 p.m. The Raiders come into the game with a 49-3 record and are led by head coach Jacob Thompson. The game will be at Curtis Culdwell Center, so come out and cheer the Lady Eagles on to win their first state championship! Tickets sales begin at 2:00 p.m. and are $12 for adults and $7 for students, with cash and credit cards both being accepted. Parking at the Curtis Culwell Center is $15 and they have implemented a Clear Bag Policy to ensure guest safety and faster entrance into the facility.