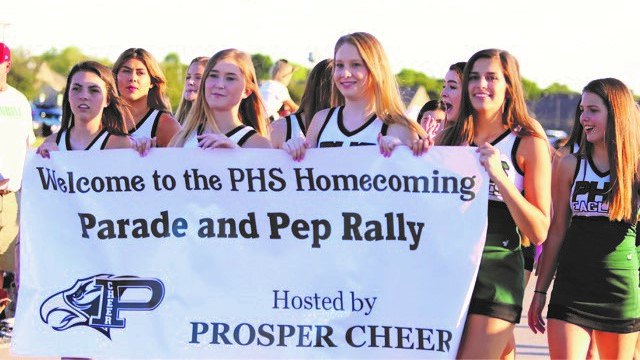 “Small town, Big heart” is the motto seen all over town. It means Prosper is quickly becoming a big town while the small-town ways of doing things are highly sought by its residents.

One of those small-town virtues is the annual Homecoming parade. It continues to grow bigger every year. Residents who’ve watched it grow each year are amazed and say they hope the parade will remain a staple in the community.

Last Wednesday, the community was transformed into a major parade route, with parents and students lining both sides of the street to cheer their favorite float and grab a bit of candy. Members of the homecoming court were carried on fancy cars and trucks, Town Council members rode on fire trucks and other vehicles, leaders in the Prosper Independent School District were also transported through the parade as well as past homecoming queens.

As the parade advanced from Reynolds Middle School toward Coleman, throngs of people slowed its forward motion to gather the abundance of candy thrown from moving vehicles, floats and participants who were walking with the parade.

This year there were many volunteers stationed along the parade route that ended at the high school. Amy Nader, mom to one of the Lacrosse players, and Angelica Bonin, mom to the junior varsity mascot, were stationed just blocks from Crawford Street on Coleman. Both could be mistaken for high school students in their neon yellow volunteer tee shirts. They both said they look forward to the parade each year and hope it continues.

The Contreras family was seated along the parade route in front of their house on Coleman. They said they do this every year to watch the parade which is a favorite family activity. When asked to name their favorite part of the parade, the children were quick to respond, “The Candy.”

James Clarke and his daughter Landowyn, 6, were seated in the back of their SUV to watch the event pass by. Landowyn attends Folsom Elementary School and said she was looking forward to seeing her big brother Jostein pass by with the high school varsity football team.

Cheerleading Coach Julie Brantley reported there were 89 floats including community and school participants and Kim Gee served as chairman of the event as she has for the past few years. It started at 5:30 p.m. and ended at the high school where there was a community pep rally in the arena and a free barbecue dinner furnished by Carpet Tech.

Members of the homecoming court were introduced as well as past homecoming queens. Tucker was introduced was to the crowd with a description of his career achievements.