PROSPER (August 7, 2017) Prosper’s current Fire Chief, Ronnie Tucker, is hanging up the turnout gear for the final time this month as he closes out a 42-year career in the fire service, 25 of which were spent in Prosper. Chief Tucker is the latest in a lengthy line of dedicated volunteers who have worn the mantle of Fire Chief, and in addition to his time as a volunteer, he was the first compensated, non-volunteer to hold the position. A Town-wide celebration of Chief Tucker’s career and accomplishments is scheduled for Thursday, Aug. 31 from 11 a.m. to 1 p.m. at Lighthouse Christian Fellowship Church, 4331 Prosper Trail. The event, which includes lunch, is free and open to the public. Chief Tucker began his career in 1975 with the Allen Fire Department as a volunteer. About three years later, he joined the Richardson Fire Department as a fulltime firefighter, where he remained for 34 years. During that time, he served as Dispatcher, Firefighter, Driver Engineer, Lieutenant, and Captain, retiring in 2012 as Battalion Chief. In 1992, during his tenure as a fulltime Richardson firefighter, he began volunteering in Prosper. Four years later, he entered into a contract with the Town of Prosper as part-time Fire Chief. He converted from contractor to regular employee, remaining in part-time status, in 1998. Following his 2012 retirement from Richardson, he became fulltime Fire Chief in Prosper. Chief Tucker is currently the longest-serving employee of the Town of Prosper. During his tenure, the Prosper Fire Department has grown from a Volunteer Fire Department with one part-timer to 35 fulltime, full-qualified firefighter/paramedics, engineers, drivers and administrative personnel and 15 part-time personnel. A four-bay Central Fire Station was built in 2004 and a second three-bay station in Prosper’s growing west side was finished in 2016. Under the meticulous eye of Chief Tucker, he oversaw every aspect of planning, design and construction of both facilities. The Chief has served on virtually every Town committee and has a long list of professional affiliations and awards. At the most recent Prosper Fire Department Annual Awards Banquet, he announced his intention to retire, and in response, the Prosper Ladies Association, sponsors of the banquet, established the Chief Ronnie Tucker Scholarship Foundation, dedicated to assisting Prosper students continue their education. Chief Tucker, his wife Janie and daughter Brande are long-time residents of Prosper and plan to split their time between their Prosper home and their nearby ranch. ### 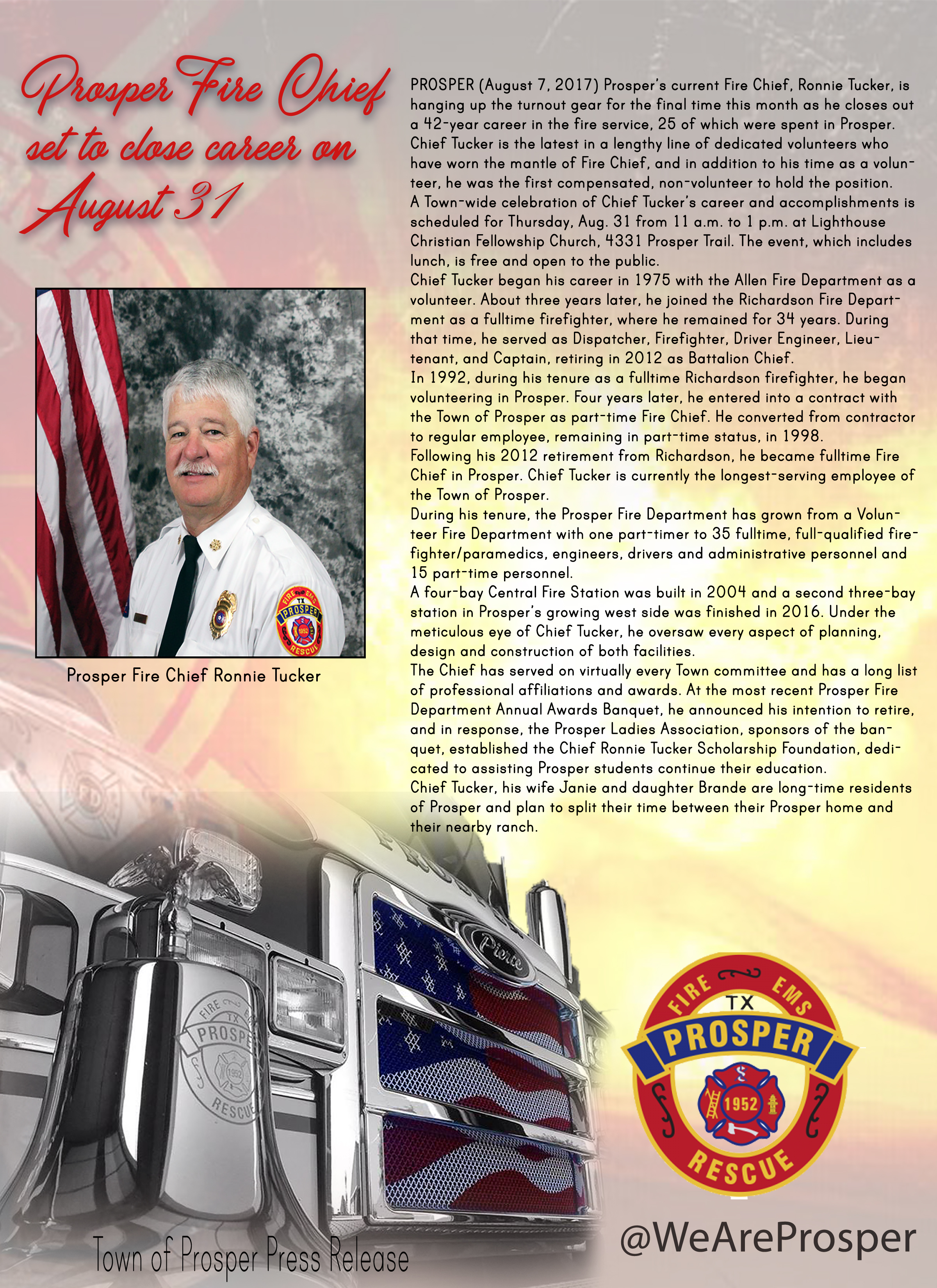