Recently I took on a new acquisition — one I’ve wanted for several years. I’ve been looking at drones on and off for probably five years. There is a creek bed through the pasture behind my house and I know there is wildlife there that I need to see.

Well, I finally took the plunge and now I can tell you what not to do when you get a drone.

First of all, if you ever hear “I don’t want to watch the tutorial, I want to fly it,” come out of your mouth, be afraid. Hopefully you will have a more tempered soul with you who will advise that you should watch the tutorial. I did, but it didn’t matter. I didn’t listen.

My son, the voice of reason, even suggested we go outside before activating the drone. I didn’t listen to that either.

I named my drone Ralph because my son, Trey, thought ‘Drone One’ would be boring. I’m looking at my new adventure as the first in a fleet so Drone One would be a good name, but I relented. I once had a dog named Ralph whom I loved dearly and I’m planning to have a love relationship with the drone, so Ralph it is.

So, when everything was finally ready to go, the suggestion to watch a tutorial first was more than I could handle when I just wanted to fly that thing and then go to bed. So… we flew it… inside my house. Trey suggested we take it outside but I wouldn’t listen. Maybe being sleep deprived was affecting my judgment. Sure, let’s go with that.

I turned on the controller. So far so good. Then I turned on the drone. Excellent. Then we got the rotors to start spinning. Excitement. The next step is kind of a blur. Ralph rose and I was ecstatic. I thought Ralph would just go up and straight down again but Ralph seemed to want to explore. In about two shakes of some kind of tail, Ralph flew under the chair like a scared puppy in a new home and continued to swing its rotors. He wouldn’t come out until we figured out how to shut it off. But before we got to that point, we each tried at different times to grab it and pull it out. Don’t ever do that!!!

Luckily for me, I just got a small bruise on my thumb. But Trey needed ice, and lots of it, for his injuries.

Feeling a little worried that I had damaged Ralph, I decided to power up again. By this time, I had read quite a bit more in the almost useless owner’s manual and figured out how to make him go straight up and straight down again. It was a pretty uneventful flight, but by this time, uneventful is what I was shooting for.

I’ve learned quite a bit since the day I received my new drone. I’ve flown it several times and each time I use a YouTube tutorial. Isn’t it great how you can learn almost anything on YouTube?

Since my first flight, I’ve learned I’m going to be having fun with my new toy; calibrate before going on an adventure; YouTube is my friend; and my grandchildren think I’m a cool Mimi.

So, if you see a drone flying around Prosper, it could be Ralph. Rest assured, though, I’ve learned my lesson. No more flying until I have the know-how. It’s a process and a learning curve. 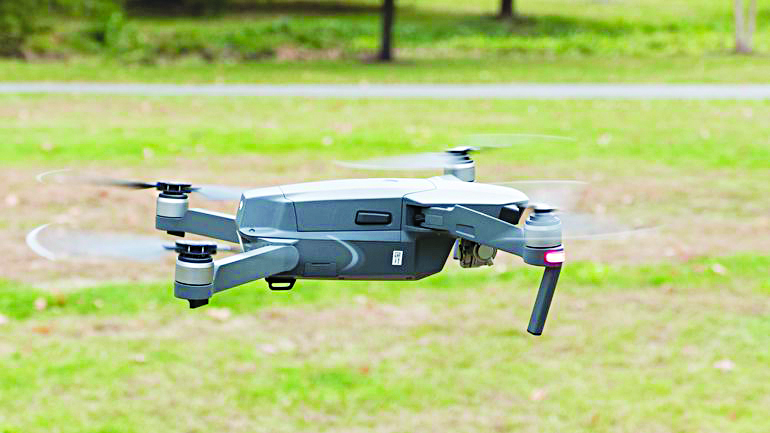