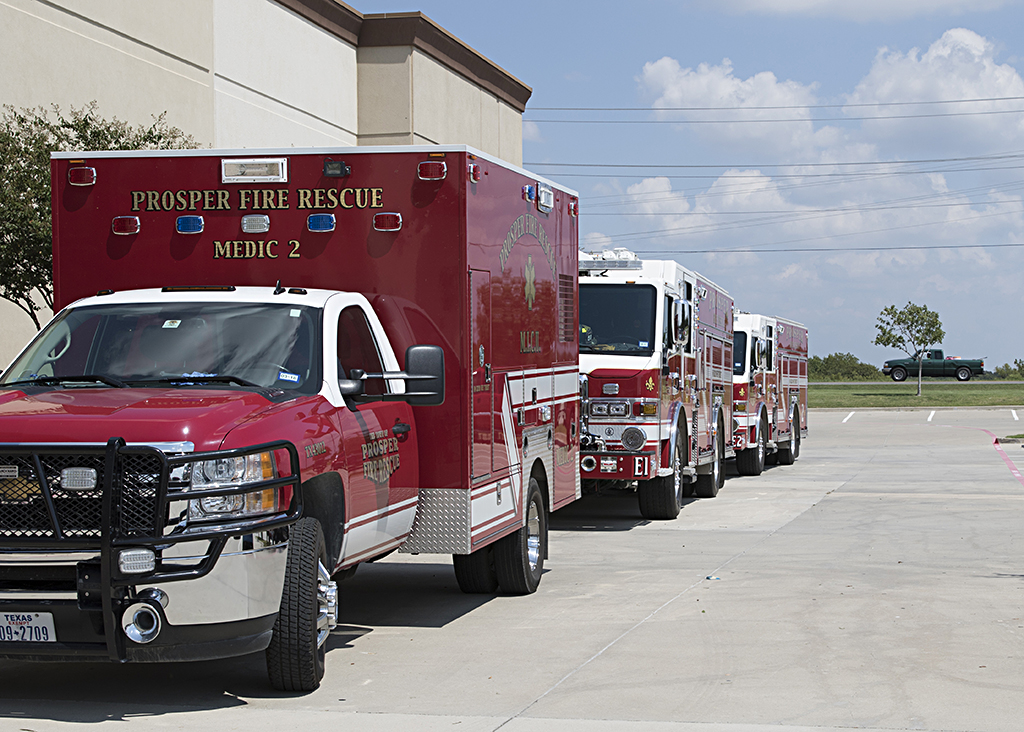 Final inspection came last Thursday for Prosper Fire Chief Ronnie Tucker as he greeted each firefighter under his command for the final time in a formal setting and in uniform. He shook each hand and shared words of encouragement and then shared a hug with each Prosper firefighter before stepping into the next stage of his life as Prosper’s first retired fire chief closing out a 42-year career.

It was a day of mixed emotions for Tucker and his family. Janie, Ronnie Tucker’s wife, said sleep was sparse in the Tucker household the night before. This day signifies a huge change in life for the Tuckers, and like any big change, it comes with ups and downs. Janie says after a lifetime of jumping every time the radio goes off, the Tucker family will be finding its new normal. And Janie says God is very important in their lives. “Without Him nothing would be possible. He gets us through the tough times.”

She also subscribes to the philosophy found in the Bible verse Jeremiah 29:11-13: “‘For I know the plans I have for you’ declares the Lord, ‘plans to prosper you and not to harm you, plans to give you hope and a future.’” She says their family will rely on the Lord to guide through this new stage in their lives realizing it is a huge adjustment.

Donnie Norman, Fire Chief of Travis County Emergency Services District One, said this occasion was so important to him and his Assistant Chief Sammy Hancock that they drove three-and-a-half hours to be with the Tuckers. Norman said he and Hancock met Chief Tucker 20-25 years ago. “He has been a friend and mentor to many of us so we wouldn’t have missed this event,” Norman said. “It’s worth the lengthy drive to be here.”

Prosper Mayor Ray Smith said “Ronnie was such an instrumental part of our leadership team I don’t think we can honor him enough. This is just a small token of our appreciation. Hopefully he will be excited for some of the things that are about to happen.”

Before final inspection, multiple presentations were made to honor the outgoing chief and to commemorate his service. Not the least of those was the announcement from Prosper Parks and Recreation Board Chairman Barbara Cottone. With several of the board members standing around her and next to Chief Tucker, Cottone said the park on First Street commonly known as Fire Department Park would be hereafter named Tucker Park. Children will be playing in that park and talking about Tucker Park for generations, she said.

The ceremony was filled with speakers who worked with Chief Tucker in the past as well as presentations to honor him. Even Janie received a presentation. It was a metal sculpture to hang that reads “All Tuckered Out.” This came from the wives of the Prosper firefighters and they also gave her flowers.

Captain Jason Graham, president of the Prosper Firefighter Association, presented Chief Tucker with a special fire helmet made especially for him. As the gift was being unveiled, Assistant Fire Chief Stuart Blasingame now Prosper’s Fire Chief, read the history behind the fire helmet explaining the different aspects that make it functional. This helmet was wrapped with photographs from Chief Tucker’s career from the beginning to the last fire.

Jeremy Hunter and B.J. Wendling, both members of the fire department’s honor guard, presented the chief with a canvas wrap photo of the honor guard in front of the Central Fire Station and also presented him, in ceremonial fashion, with two flags that had been flown over the fire station.

Members of the Prosper Town Council made a presentation to Chief Tucker to declare the day Ronnie Tucker Day.

On many occasions, Tucker was brought to tears but none more than when he looked at his wife from the podium and said “Thank you.” He had to fight back the tears and at one point stopped to try to gain composure. He said, I’m going to get through this. He told Janie thank you for her years of support with the challenges of his comings and goings for the fire department.

He told how his daughter Brande, when young, would ask him to stay home. Then he looked at Brande, their only child, and said, “Daddy’s going to be home.” He shared that when he and Janie married, she knew she was marrying a firefighter but she never signed on to be the wife of a fire chief.

On a lighter note, Emergency Manager Coordinator Kent Bauer brought a walker for the chief decked out with headlights and sirens. Blasingame prefaced the presentation with a disclaimer saying he had nothing to do with it. Then Chief Tucker stood and asked Blasingame “Is that guy still on probation?” referring to Bauer whose job tenure is only a matter of months. Blasingame said yes and then Tucker said, “And I’m still employed as of midnight?” and Blasingame agreed as if Bauer should be worried about his job after making the presentation of a walker. The auditorium came alive with laughter.

Following the ceremony and presentations, a luncheon was provided for everyone to celebrate. It was furnished by the Prosper firefighters and the Prosper Ladies Association.

Robyn Battle, Town of Prosper Secretary, commented on Tucker’s retirement. “He has left such a mark on the town. I don’t think anybody will ever forget him. And he has left such a wonderful legacy that the fire department can build on to try to live up to his high expectations and high standards.”

Others expressed similar feelings. Town Council member Kenneth Dugger said “Prosper’s been blessed to have Ronnie Tucker. He has set such high standards that will help keep Prosper being the best.”

One of the firefighters, Lieutenant B.J. Wendling said for him, this event is bitter sweet. “I am happy for him and Janie to have time with each other to go do whatever they want to do for that next chapter of life, but I will miss him a lot.”