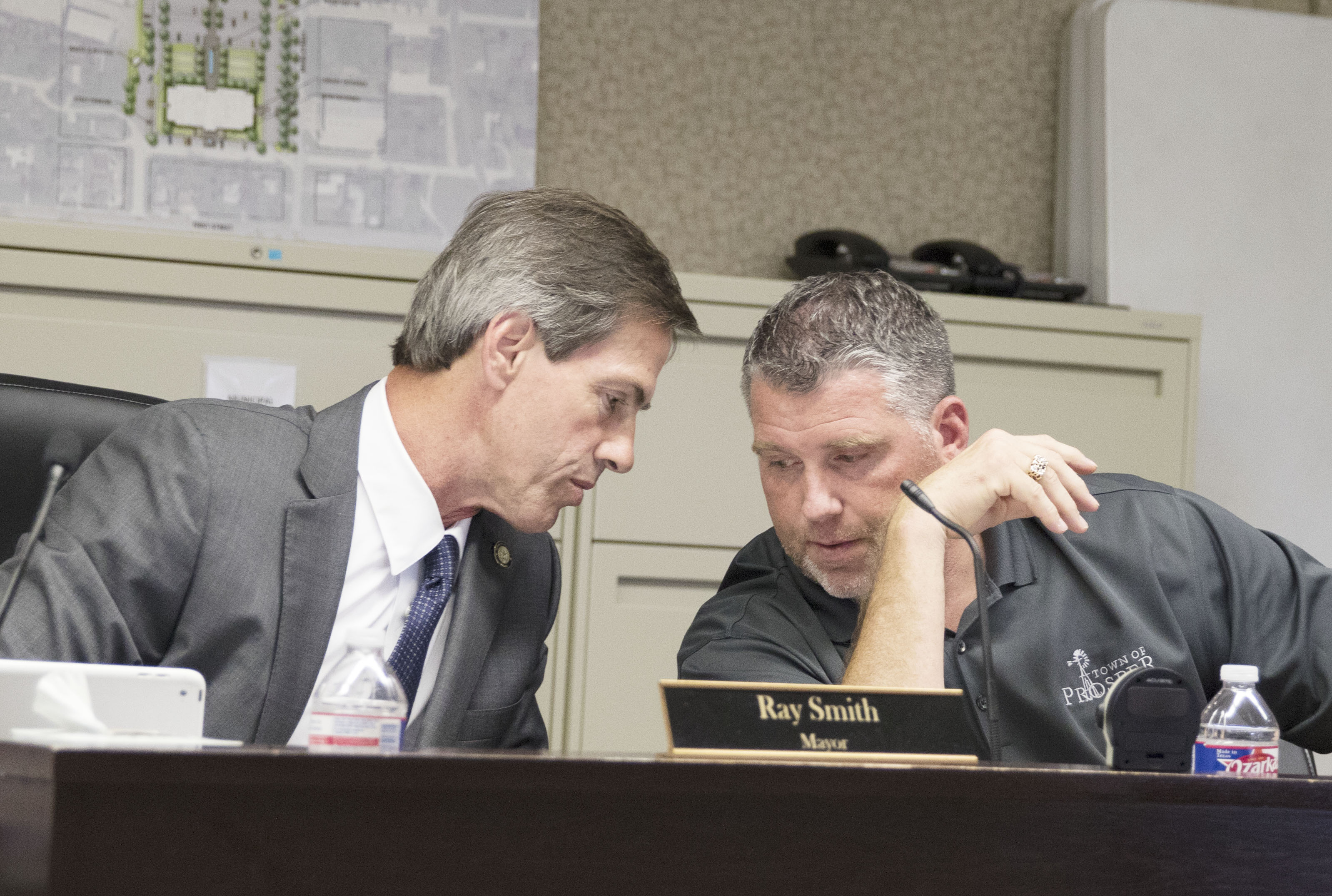 There was standing room only in the Prosper Municipal Chambers on Tuesday night for the regular town council meeting with attendees flowing out the door and even more standing outside.

At issue for most was a continuation of remarks made in the July 25 meeting — the condition of streets in the Windsong Ranch Development. While Windsong residents had the largest contingent presence, there were others there to speak before the Council and other issues on the agenda.

Mayor Ray Smith conducted the order of the meeting to best facilitate the large numbers present realizing they were mostly there for one item so he skipped to that item as soon as possible. The agenda item in question was approved unanimously. It was a proposed ordinance amending the FY 2016-2017 Budget and Capital Improvement Plan to provide funding for the Acacia Parkway (Gee Road – Windsong Parkway) Project and First Street (Dallas North Tollway – Coleman) project. Prosper Finance Director Kelly Neal introduced the agenda item saying the CIP Amendment allows for $1,022,782 to fund the reconstruction of Acacia Parkway which will be transferred to the Capital Fund. Also $136,000 for additional survey work on the First Street (Dallas North Tollway-Coleman) project.

Steve Glass, Deputy Director of Engineering Services, followed Neal with a timeline description of the actions taken over several years to remedy the Windsong problems and then Mayor Smith opened the floor for individual speakers, of which there were many. The first speaker was David Blom with the Terre Verde Group, developers of Windsong. He spoke to the frustrations of not only Terre Verde but the residents who’ve lived on streets that are falling apart for the past two years or more. He told the Council, “You can see by the amount of attendance that the interest is high.” Blom described some of the actions taken by Terre Verde which included regular Town meetings to answer residents’ questions and explained that they are to the point that only the Town can answer the residents’ questions now. It is out of the hands of Terre Verde. He acknowledged the great relationship Terre Verde has had and continues to have with the Town of Prosper. He explained that Windsong now has close to 400 homes occupied and the development is only one-third completed so there is a long way to go.

A long line of residents followed taking a turn at the podium. Most explaining they have lived there for years and when they bought their homes, they placed their faith in the Town of Prosper and now it’s time for the town to take action. They are concerned about property values and also pointed out that the condition of the streets is not only a safety hazard, it is discouraging other home buyers and that causes the town to miss out on the taxes of homes in Windsong. They encouraged the Council that the amount of money ($1,022,782) dedicated to their street repairs is not enough and want the Council to increase that stating that to fix the roads will cost in excess of $3 million.

After the final speaker left the podium, several Councilors responded. Jeff Hodges pointed out that the money named in the agenda item is an amendment to the current budget. “More will be included in next year’s budget until the whole amount is committed.”

Town Manager Harlan Jefferson also described how the Town has been working on trying to remedy the problem but the process is slow because of litigation. He said he wanted to be careful about what information was disclosed because they are in pre-litigation stages. He said the Town’s investigation revealed what probably happened. He said, when roads are built according to the correct standards, they should be expected to last 30 years, “so for a road to fail this early, there is obviously some type of problem.” He explained further “We are suspicious that the crew did not properly compact the sewer line in the construction and then it appears to be a potential default that the company hired to make sure the road was properly compacted, didn’t catch that either.” He said those are some of the things being looked at but he wanted to mention that in the meeting to give resident the assurance that all the roads in Windsong are not going to fail.

Following the meeting, Blom said he was satisfied with the explanations of the Council but cautioned that Tuesday’s action is only a start. He also mentioned he believes they could have moved on the issue a little faster, but overall, he feels that things are finally getting started.

Another resident who addressed the Council is Gary Lloyd who said he was there on behalf of the residents of Cedar Ridge Estates which is across the road from the fire station. “We have about 100 residents in our neighborhood,” he said. He came armed with large photos of the problem house on his street which is vacant. He said it has been in that state since it was struck by lightning and caught fire last year. He said it is an eyesore and believes it is becoming a health hazard and affecting the property values of the homes in the area. Since Lloyd’s remarks were in the Citizens Comments section of the agenda and not a part of the agenda itself, Councilors could not address the situation.

After the approval of the agenda item that affects Windsong, those residents in attendance made a mass exit and Mayor Smith joked, asking them if they didn’t want to stay to hear the rest of the meeting.

In other business, one of the items in the consent agenda was tabled for the August 22 meeting. It was the proposed ordinance for a Special Purpose Sign District for Prosper Town Center, located at the northeast corner of Preston Road and First Street.

Other agenda items approved include:
A contract amendment of the Professional Services Agreement between Specialty Land Services LLC, and the Town of Prosper for easement and right-of-way acquisition services.
A contract amendment to the Professional Engineering Services Agreement between Graham Associates Inc. and the Town of Prosper related to the Prosper Trail (Kroger – Coit) project and the First Street (Dallas North Tollway – Coleman) project.
Awarding a construction bid Groves Electrical Services Inc. for the Coit Road Median Lighting (U.S. 380 – First Street) project, and authorizing the Town Manager to execute a construction agreement for same.

A public hearing was scheduled for the proposed tax rate of 52 cents per $100 valuation and to hear the proposed budget for the 2017-2018.

The next regular meeting of the town council will be August 22.