The Light Farms Barn Yard, in the middle of the Light Farms community, will be bustling with a large crowd beginning at 6:30 p.m. on Saturday night. Ben and Skin of “The Ben and Skin Show” will host an open-to-the-public, free, family-friendly charity fundraiser concert and auction for friend and Light Farms neighbor Bruce Thompson, who recently received the devastating diagnosis of Deep Lobe Parotid Gland cancer. 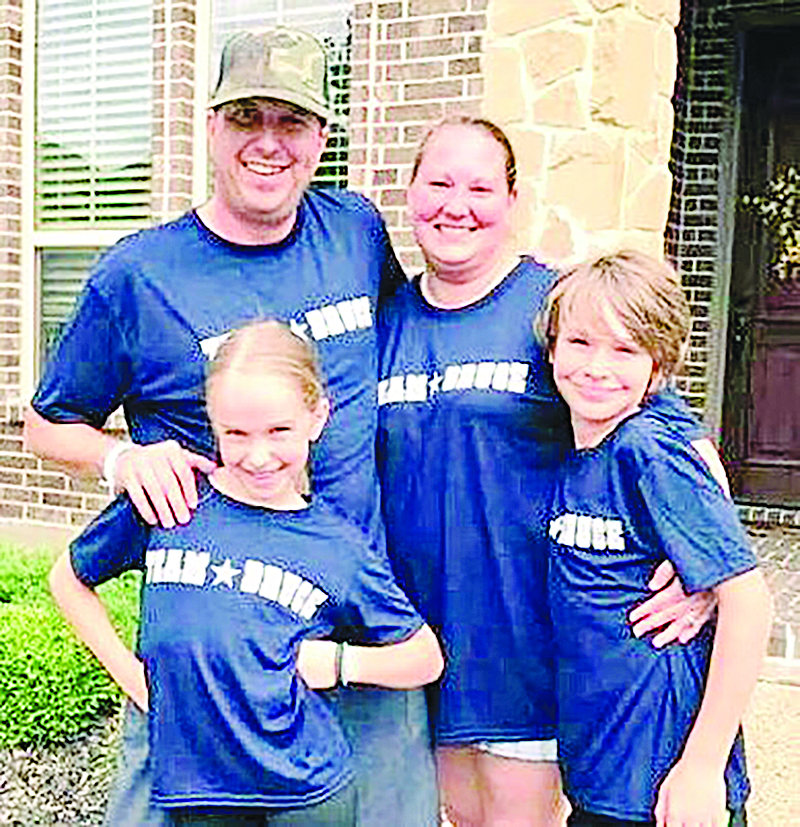 In April, Thompson went from living a dream life in the suburbs to the fight for his life. This loving husband to Tori, and doting father to Logan, 9, and Avery, 7, was suddenly having trouble communicating while in the bleachers at his son’s youth baseball game in Prosper. His hand began to tremble uncontrollably. Soon after came his life-altering diagnosis. Sadly, lesions caused by his cancer have now spread throughout his body to his lungs, shoulder and brain.

“Thompson is known throughout Light Farms as being one of the nicest and kindest souls you could ever meet,” Ben Rogers of “The Ben and Skin Show” said. He is a welcoming neighbor, always quick to smile and extend a friendly handshake. A volunteer youth football coach with a style that makes little kiddos smile and feel like superstars.”

A press release for the event states “Bruce is so selfless that he would not let his neighbors throw a benefit exclusively for him, unless they were willing to start a new charity with him that could help far more than him alone. And so, the WinTheDay.org charity was launched with the following mission statement: ‘Providing support for North Texas families who are blindsided by a sudden, acute cancer diagnosis.’”

The momentum among friends and relatives began to build for a movement that resonates with so many because, this could happen to anyone. What started as a modest charity cornhole tournament soon grew into a full-fledged charity benefit concert and auction to raise funds for Thompson’s fight, and to launch his new charity.

Rogers says several big names have joined the cause along the way to contribute unique experiences, fantastic sporting event tickets and rare, autographed memorabilia to be auctioned off both in a live online auction that is underway now through Todd Wagner’s extremely cool CharityBuzz app, and a silent auction the night of the event.

Some of the auction items can be seen now — such as a suite for 18 to a regular-season Cowboys game, lunch with Mavs GM Donnie Nelson, breakfast with Rangers GM Jon Daniels, Cole Beasley guest-coaching a youth football practice, and more. Status of open bids may be seen now at: www.CharityBuzz.com/WinTheDay.

But the good news keeps pouring in to support the new charity to fight cancer. Country music star Josh Abbott joined the movement early on with his band’s generous charity, JAB Cares, as the official 501c3 of the July 22 event. Although Abbott’s band is not available to perform the night of the event, there will be fun, laid-back, family-friendly entertainment. In addition to Ben Rogers and Skin Wade, four different acoustic performers — Brad Stinson, Kevin “KT” Turner of the Ben and Skin Show, Jesse Jennings and Tim Urban from Season 9 of American Idol — will take center stage during the concert.

Bounce houses, porta-cools and free chicken-strip baskets donated by Golden Chick will be available for kids. A nice selection of food trucks will also be available. Attendees should bring lawn chairs and coolers for the special outdoor event beneath the stars.

For more information about Bruce Thompson and the start-up charity, visit the websites at https://www.youcaring.com/brucethompson-828059 and  www.WinTheDay.org.